Ha! I think its pretty safe to assume that I am a terrible blogger. How long has it been since my last post? Five, maybe six months? Oops. Summer came and life just kind of happened. And boy did it happen.

Q turned one and shortly after started walking. I remember before I became a SAHM I always said the one major milestone I wanted to see was my child walk for the first time. And then when I actually started that life with my husband working to support our family, we both said that we were happy I was home because at least one of us would be able to witness it if not both of us.

Well, we fudged that one up real good.

The day before her big birthday bash, Jason, my parents and I ventured out to get last minute food and supplies for her party while my sister stayed home with Q and her two girls. We were on a time crunch because it was 4th of July and the stores were all closing within a few hours, so we hightailed it out. We didn’t make it more than 2 miles down the road before I get a text from my sister bursting at the seams with excitement that Quinn took her first ten steps. I should have prefaced this by saying that as a supported stander before this event, she had shuffled here and there but had not officially taken consecutive steps to actually qualify as walking. So that was the time she decided to take TEN steps?! Shortly after the text we received a video of my nieces very patiently coaxing Quinn to the other side of the room.

I sobbed. My parents laughed. And then I laughed, because it just figures that would happen and thats just how my life goes.

I always think back to those first few days when she was so unstable on her feet and marvel at how quickly things change. How did we get to this point already!? Here are pictures that I took on Fourth of July and she could barely sit on the front steps let alone walk. And then several hours later she’s walking. Madness, I tell ya. 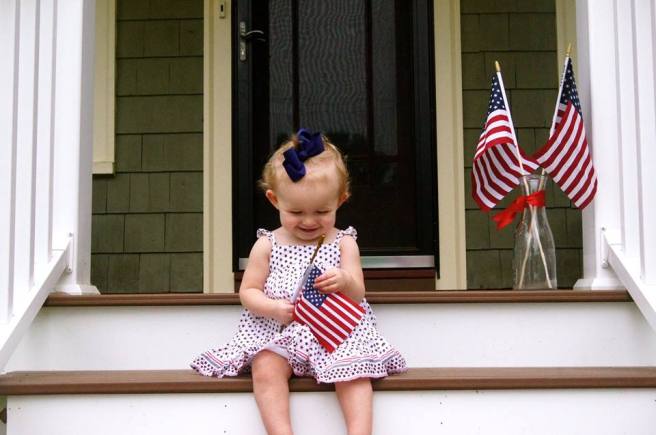 She rules this house and [jokingly] controls us now that she’s 100% mobile; Jason and I are on alert 24-7 and any kind of shopping that requires her to be contained or strapped in to something just doesn’t fly with her. She’s head strong and so fiercely independent that it makes my big mama heart sing and cry at the same time. Just a few weeks ago we took a walk to the post office and she insisted on walking the whole 1/2 mile on her own with no help, sunglasses, tutu and all.

Sometimes we get frustrated because she likes to pull a fast one on us during those times when we just.need.her.to.sit, but most of the time its so fun to watch. She’s not quite running yet, though she tries, and she knows she can’t so when she wants to make a quick and clean break for it, she crawls. Because you know, she’s like lightning on her hands and knees. Next week when the summer temps finally decide to take a hike (Im over the heat. So-o-o-o-o-o over it.) we’re taking her apple and pumpkin picking!

Sleeping has gotten better, too. She went through a brief stint when we had to co sleep with her because she would have a meltdown if we even brought her near anything that resembled a crib. We tried crying it out too but when she got so out-of-control upset that she’d throw up everywhere, we threw in the towel. Now that she’s cruising everywhere, her naps range from 2-4 hours and she’s back to sleeping a solid 12 hours, in her own bed!

The house has been making strides, though our lawn went from fifty shades of green to fifty-one shades of dead. I don’t even want to talk about it…I really should have just said its making strides inside. I told Jason the list of priorities for the spring include grass, a clothesline and a vegetable garden and I won’t take no for an answer.

Ive discovered a bunch of small antique shops in our area and yesterday a dear friend introduced me to the most amazing vintage-inspired shop tucked away in a neighboring town after we had the best lunch together catching up.

I scored these darling gold-dipped stone apples and they’re the perfect addition to my kitchen. Maybe I’ll go back for the pears since Im in full blown fall decorating mode. 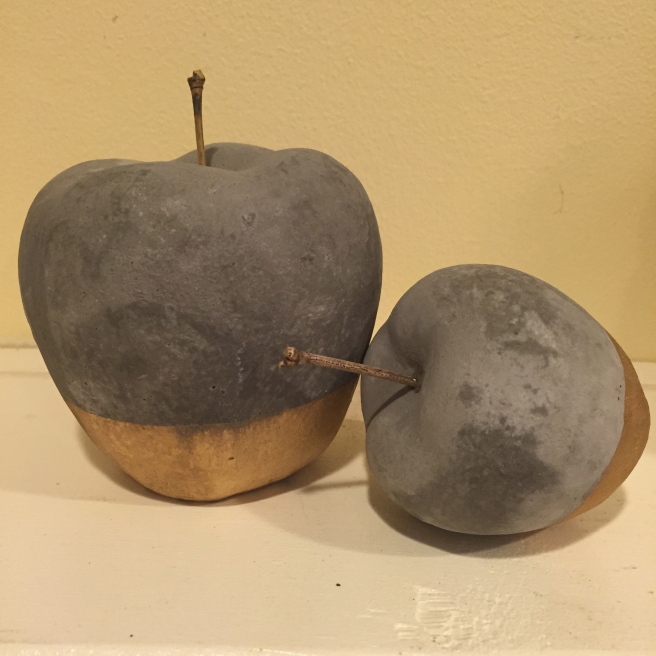 Ive also added a few vignettes to my dining room with the help of a few sites that Ive discovered (Painted Fox, Decor Steals and Antique Farmhouse) and check for new things on the regular. Ive got a few ideas for refinishing that dresser since it makes me feel like the room just has one massive black blob in it, but I think for now I’ll just replace the drawer pulls with something a little more interesting. Those fabulous galvanized canisters are from Decor Steals and those black and white prints are actually of different Irish landscapes and castles from a very old book of Ireland that literally fell apart. I figured if the book was going to stay packed away, I may as well make use of the beautiful images. 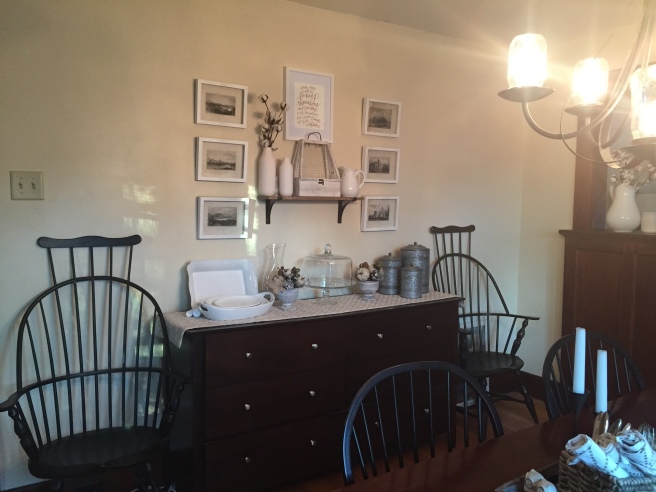 When my inlaws sold their beautiful barn-style lake house last year, they were selling it with the furniture too (a lot of the furniture came with the house when they purchased it, including this vintage turquoise dresser) with the exception of whatever Jason and I wanted for our home. This dresser was at the top of my list along with our dining table and I still love it as much now as I did the first time I saw it. We usually keep board games and craft supplies in here and the occasional junk, because I firmly believe that every room in your home needs a junk drawer. 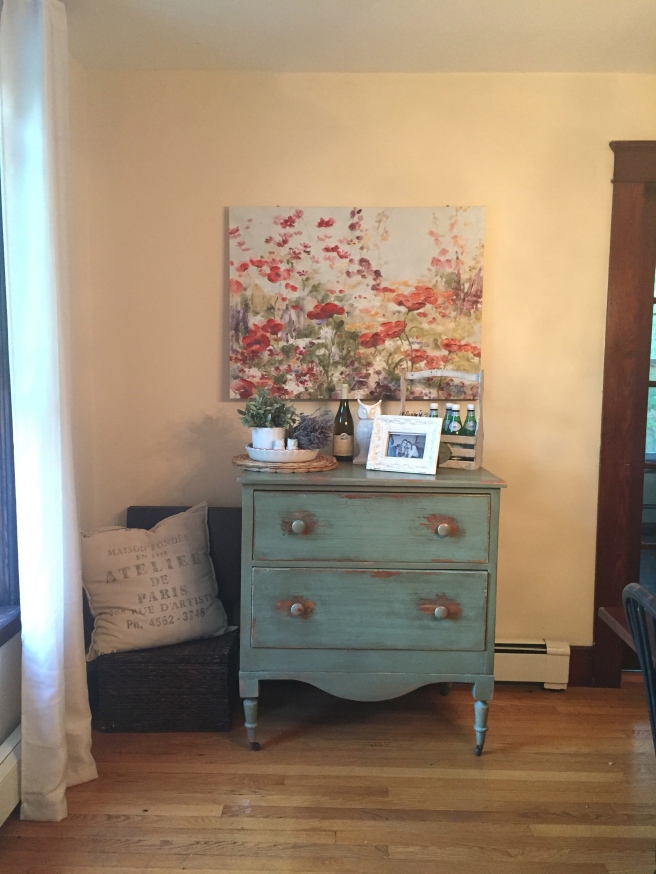 I like to keep a neutral palette in my home with a few pops of color, and Ive been brainstorming ideas to bring in a little more color while brightening it up in my dining room without making it look totally obnoxious. I have big plans for giving our dining table a little facelift, but the other night I was perusing World Market and spotted these beeeee-utiful tufted chairs for the ends of the table and its literally all I can think about now.

I just got an email alert today and they’re now marked down to less than $200 for the PAIR. Seriously? Drool.

I have a few other little projects going on here and there but not worthy enough to write home about since they’re not finished yet. Quinns playroom is happening real soon because the rate at which she acquires toys is out of control and one of these days Im going to break my face tripping on one before we get her playroom set up.

Sooo, thats a pretty solid update to make up for the last umpteen months of blog neglect. I’ll leave you with a large dose of cuteness overload to last (hopefully) until the next post. 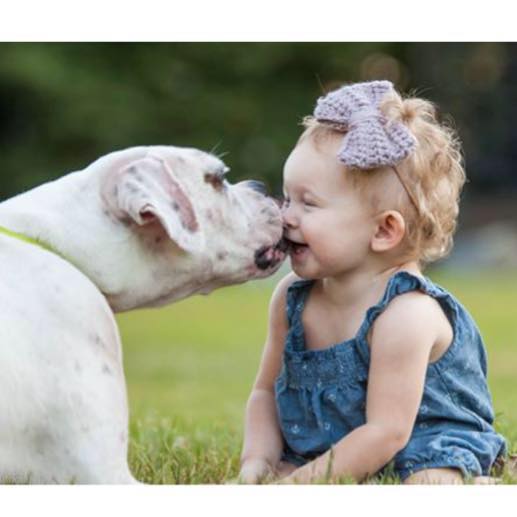 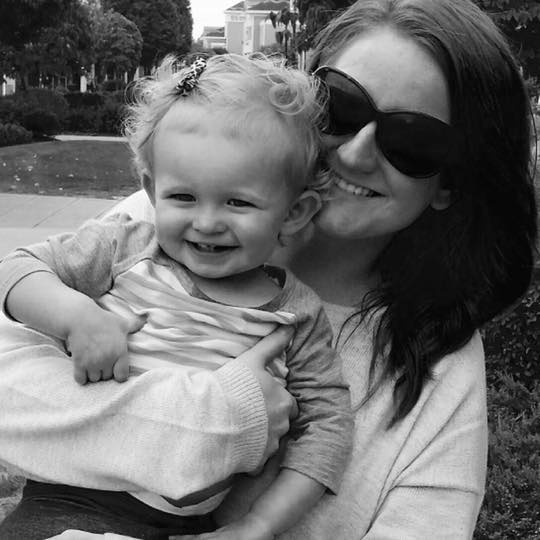 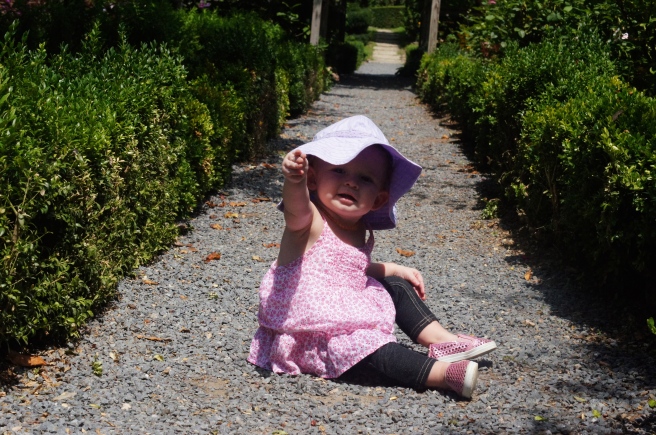