I took quite the hiatus over the last several weeks! My husband was recently teasing me because I took a break so quickly after starting a blog but with everything going on, I felt like I needed to step back. I think it was my first real experience juggling mom-life with playdates, family gatherings, birthday parties, appointments, the teensiest bit of drama (all is good though!) and just having a life and I may have gotten a little bit over-whelmed.  It kind of reminds me of my college days actually. I used to take what I called a “Mental Health Day” a week after starting classes every single semester for four years. It was my way to regroup after seeing a monster of a syllabus before having to dive into a ton of work for the next 15 weeks; even if that doesn’t make sense, it did to me. But thats beside the point. Im back!

A lot has also happened during my little break. We got our taxes back (yay!) and composed a list of definite projects to do as soon as possible around the house. Stay tuned for a guest room and master bedroom overhaul!

Q is blowing our minds with how quickly she’s growing. She just turned nine months yesterday (NINE MONTHS!) and her checkup at the doctor went perfectly. She’s 60th percentile for weight, 87th for height and totally thriving, even with her searing hate for solid foods. Im sad that she’s not as excited about eating solids as I am, and it has certainly been the biggest challenge of my life transitioning her but as long as she’s healthy and growing then everything else will fall into place. At least I keep telling myself that. With that, comes the growth spurts. The first one we ever experienced was an absolute doozy, probably more for me than her; Q had just turned six weeks and was nursing every. single. hour. For four days! I felt like I had run a few dozen marathons during that time and it took me the same amount of time to bounce back. She’s had several growth spurts since then that haven’t seemed as bad, but Jason and I were talking the other day how the last couple she also seems to deal with some major teething. Poor babe. Im back to checking her gums every morning in hopes that her top teeth will cut soon. Thankfully, Ive got a pretty good arsenal of relief for her and without it Id be totally lost. Like this tiny little bottle of teething oil… 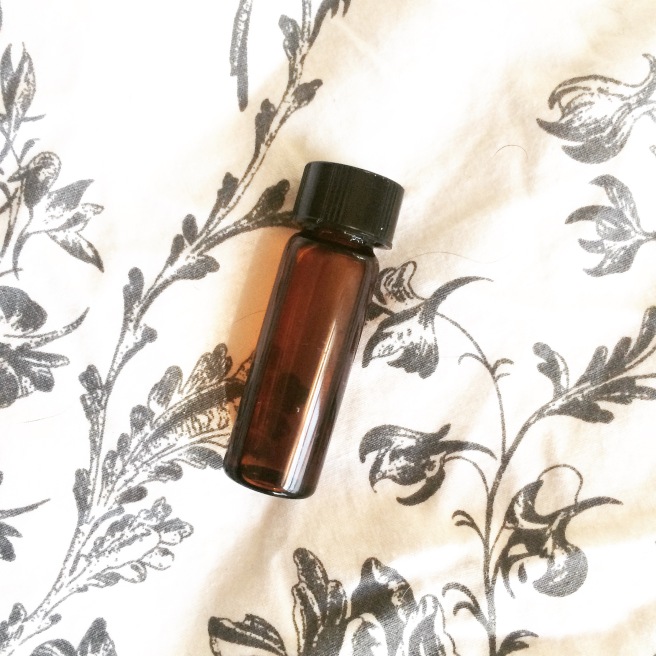 I picked up this stuff at a little shop called Nini Bambini, known mostly for its wellness services for Mamas, Mamas-to-be and kids. Nina Cullen is the owner and makes all of the oil blends herself for various things; the same time I got the teething oil (which makes Q smell like a spice drawer and I LOVE it), I also got the C.T.F.D spray (spritz up in the air for instant relief) for the few times that Q goes absolutely berserk and nothing else will calm her the fuck down. Ha! Get it? Their online shop (here) doesn’t include the oil blends for whatever reason, but Ive heard through the grapevine that you can call and order them over the phone.

Speaking of growth spurts, I have to share what I find is absolutely hilarious. I laugh because its really my way of dealing with the fact that my baby is getting too big.

I always ignored being judged as a parent who put bumpers in her child’s crib. We all grew up with them and turned out just fine. Of course, I still keep a close eye on Q while she’s sleeping (I bless and curse our video monitor at the same time) and if I had any inkling that she would tangle herself in the bumper then I would have taken it out of her crib. But she sort of took care of that for me anyways. Its funny how her sleep habits so closely resemble mine and her dads: on her side, curled up in a ball, faced buried into something that she’s holding on to dear life for. For instance, Cornelius, her flimsy little giraffe. 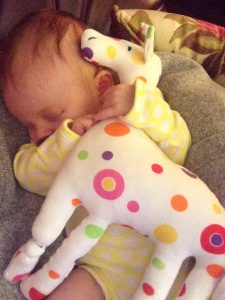 Naming your child’s stuffed animals comes with the new joys of parenthood. And also kind of lets you be a kid again.

So Cornelius was a great sleep buddy until Quinn wanted more. She somehow gravitated over to her bumper and started using it as a body pillow with one arm and one leg draped over the top. I regret not snapping a picture of this the last few times I got a chance to witness such hilarity because she squeezed the bumper so tight one night that she literally ripped it right from its strings.

I could just as easily sew it back on but Ive found that she does just fine without it in her crib anymore. But so long, beautiful, soft, delicate bumper. Maybe I’ll have it made into pillows for her room. 🙂

We also took a day trip yesterday out to visit some gals that I used to work with. I managed a beauty and wellness store just outside of Boston and promised I would visit regularly so they could all see Quinn. (Click here if you’re a sucker for good product.) Well, me too but we all know how babies rank on the popularity scale versus their mamas. The reason I mention this is because I was asked the same question again yesterday by two different people that I was by my cousin last week while he was working on my car.

“Do you miss working?”

This seems to be the golden question after you give birth and inevitably don’t go back to work.

I miss my store and I miss my staff. I miss the relationships with customers that Ive acquired over the years of working in the retail world. I don’t miss the commute but if thats the only negative then Id say I had a pretty good job. So why not go back? As much as I loved my job, I love being home with Quinn much more. I 1000%% commend working mamas (most of my friends are) and although I have some really tough days at home with Q, I make an extra effort to not complain about those times because I know not every parent can be home full time with their sweet babies. Here is how I discovered living on one income and going out of your mind talking to babies and pets all day while doing a million other things to keep your house looking semi-normal is totally worth it: that moment when you see your child discover her feet for the first time

or pull herself up to stand

or call the cat over by smacking her lips and tapping her leg (yes, she learned how to do that from watching me and it is absolutely hysterical), you would spend the rest of your life home with your child to be the one to witness those moments instead of someone else. I’ll eventually go back to work, but for now I’m having fun being a housewife and watching Quinn grow 🙂