Im going to start this post off by stating the obvious: Home Goods is a-mazing. I don’t think Ive ever walked out of that place without something and tonight, for the second time in a row proved that I cannot go in there and leave with just what I was looking for. A few weeks ago, we were out running errands and HG was on the list of stops because I needed a basket to keep Quinn’s toys in for the living room. We had officially gotten to that stage in parenthood where you step on a toy in the most random part of the house and yell out a slew of four letter expletives and cursing the asshole who ever invented something as stupid as wooden blocks.

So here’s what happened: I was in mission mode that day and was doing a pretty good job of getting what I needed and moving on to the next stop. If you know me, you know this is monumental. We walked into Home Goods and like the clever little merchandisers that they are, had a small collection of eye-catching, amazing pieces right at the front. I know how it works, I worked retail for a long, long time. That day there were a couple of console tables, a slipper chair in a pretty delicious, colorful fabric and a sofa. Jason knows the deal too as he works retail, so it usually takes something pretty good to catch his eye, and like me, the sofa sucked him right in. We both noted that it was a nice sofa and Jason being Jason goes, “Yeah, for a thousand bucks.”

So like the idiot sucker of a consumer that I am, I checked the price tag.

It was a mistake. Surely it had to be a mistake. Some new kid two days into his new job had to have put the wrong price tag on it.

You know you have to have something when you just.cant.get.it.out.of.your.head.

Long, hilarious story short: twenty minutes of browsing, lunch, and a haircut later we were back at Home Goods for a second time. I went in for a basket for Q’s toys, and indeed left with a basket…and the sofa.

Fast forward to today. We were out running errands again, and Jason had to stop at one of his fellow company stores to pick up something that he needed for his overnight resets, then we hopped over to Carters and dropped a load of moolah for Quinn’s spring wardrobe and ya di da. Usual errand stuff. I recently reupholstered our coffee table into an ottoman, because why the hell not, and noted that I wanted to run into Home Goods to see what they had for trays to put on top. We split up in the store like we always do (we cover more ground that way) and then met up in another 15 minutes or so. Jason found this gem and I couldn’t be more excited about it. 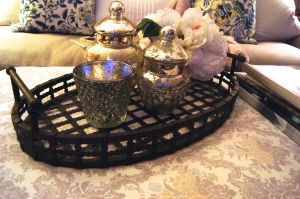 I should send him out more often when I need decor. BAM, mission accomplished. Got what I needed so we left, right? Uh no.

Somehow we ended up in the kitchen section because that is another weakness of mine (I won’t even admit how many times I wander into the Home/Kitchen section at Anthropologie and walk out with stuff that I really don’t need). Jason (again) found these AWESOME drinking glasses for $7.99. What the WHAT?!

We love finding cool things like this that tie so easily into the style of our home and get so excited when a company as huge and recognized as Home Goods carries unique items that you can’t find as easily in other major chains.

Another thing that I’ve been itching to get for a while now is a bigger jar to store Quinn’s hair bows in. As this blog progresses, those who don’t know me or my daughter will learn pretty quickly that 99% of the time that girl always has a hair bow, wrap or headband in her hair. I have always loved the idea of an apothecary jar to house fun things in and I found this super cute piece hiding in the back of a top shelf in the corner of the store. For $10 I obviously grabbed it.

So at this point, Jason is juggling the drinking glasses and coffee table tray, while Im pushing the stroller, hugging onto the apothecary jar and swinging (which I forgot to mention) this adorable robe/slipper set for Quinn.

Then Jason starts joking how our self control goes out the door once we cross the threshold to this store every. single. time and that we should leave as soon as possible before our wallets catch fire. The whole time, one of the store employees was cracking up while he was straightening up the shelves next to us. Glad we could make someones day a little better! 🙂

When we bought our house last spring, no exaggeration, we were at Lowes and Home Goods three times a week for a solid month and lets be honest here, it wasn’t exactly like I could disguise myself; I have flaming red hair and was ready to pop a baby out. It was pretty embarrassing!

I’m hoping to find a few things to spruce up my downstairs bathroom for my next mini project. Ive got bare, happy yellow walls (Sherwin Williams Jersey Cream) against bright white wainscoting that I’m itching to add a little more oomph to. Lets just see if I can leave HG this time with no more than I need.